Back in early 1999, Paul Caffyn decided to change the name ‘Incident Report’ or ‘Accident Report’ in the bi-monthly NZ Sea Canoeist newsletter, to ‘The Bugger! File!’ Back then, most Kiwi paddlers were fully aware of that classic Toyota advertisement when in various farming incidents, the word ‘Bugger!’ was used. The last clip of the advert showed the big huntaway jumping for the back of the ute, missing and landing chin first, splat in the mud. He was a rather clever huntaway, because you could clearly him mutter, “Bugger!” 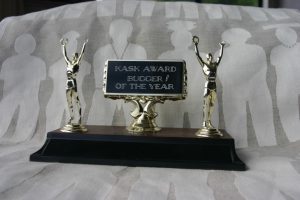 As all incidents and accidents have a degree of embarrassment and hurt pride, Paul was aiming to encourage paddlers to write up paddlers’ incidents along with a most important ‘lessons learned’. The ever so cunning plan worked a treat. There are now 75 reports listed in the KASK magazine index from 1999 to 2019. Many are rather serious investigations such as JKA’s report on the near miraculous night rescue of a French Paddler off Motunau (No.170 p.8) while others were a tad less serious, such as ‘Mr Cock-up Pays a Visit’ (No.82 p.11). The lessons learned were always there, lessons for paddlers to avoid situations where the word ‘Bugger!’ would be uttered.

History of the ‘Bugger!’ Award

2008 was the inaugural year of the ‘Bugger!’ Trophy Award. Initiated by Paul Caffyn, the elegant trophy was assembled by a Greymouth jeweler, to be presented to the paddler or paddlers who had an embarrassing incident. Nominations – mostly paddlers dobbed in by their mates – were considered by the KASK committee and presented at the AGM. The concept of the award was for kayakers of all abilities to share mistakes, incidents, kit failures etc., in an open forum for which we could all share, relate to or otherwise learn from.

The award has been presented to the following:

Max Grant
A party of four kayakers were in Luncheon Cove, Dusky Sound, Fiordland. They had set up camp and were assured by Max, their unofficial trip leader, who had been paddling in Fiordland for over 25 years, that the sea would not come up to where their kayaks were parked on rocks, and no tethers were required. Late evening, Melz Grant (Max’s daughter), heard banging noises from the cove, very much like that of kayaks bashing against rocks. She was assured (by her father) that it was only a seal climbing over the kayaks. The noises continued and a check revealed three kayaks were being bashed by surging against rocks. Of the fourth kayak there was sadly no sign! A mad rush to find head-torches and find the kayak ensued and once found, all four kayaks were lifted higher and tethered, sleep was resumed. Next morning though, water being still, the kayaks were moved to the water’s edge and left untethered while camp packing, ablutions etc. were underway. The three blokes returned to their kayaks to find their kayaks had disappeared but in the narrow neck of the cove the fair damsel in her kayak was seen shepherding the three errant kayaks back to shore.

Dave on a kayaking trip from Karumba to Darwin, experienced a series of mishaps. First falling on slippery rocks, then in a storm in the middle of the night, a tree branch fell and speared vertically through his tent. But wait, back home and effecting repairs to his tent, while cutting thread, the scissors slipped out of his grip and fell. By quirk of gravity, and a touch of the Corolius force, the razor-sharp points targeted an artery in his thigh. The scissors were embedded in his leg. Dave proceeded to pull the scissors out instead of forming a donut bandage and leaving the scissors in situ! Fortunately, Dave’s wife, an experienced nurse, came to the rescue.

Bloke paddlers should not be sitting down sewing, while multi-tasking with sharp scissors. 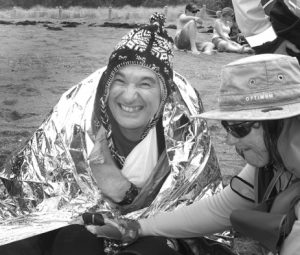 Steve with another paddler, on the first day of International Kayak Week in Auckland, was paddling through a narrow gap in a reef when a surge sucked out and left the two paddlers almost high and dry. Steve was (the story goes) left underneath the lady paddler and must have braced with his arm against the rocky seabed which resulted in a droopy shoulder and subsequent out-of-boat experience. Steve was assisted by fellow paddlers 300 metres to shore, then transported by ambulance to hospital. Steve provided a detailed account of the experience including the recovery/rebuild time of weeks, even if the shoulder went pretty much straight back in. KASK magazine No. 145 p.10 has an excellent article by Shaan Gresser titled To Reduce or Not to Reduce? (Shoulder Dislocations) along with Steve’s story of the drama on p.14.

Some advocate quick (shoulder) relocation in most cases but Steve’s overall view is, ‘if you don’t feel comfortable, then that’s enough,’ leave it to the pros.

Charlie Barker
Charlie was running a rocky gauntlet – the surge sucked back to expose a ragged, rocky bottom, leaving him in a very unfortunate Bugger! moment. What followed was a crunching, sad boat-breaking incident in which Charlie had to be rescued. As the group was a few kilometres away from a decent landing place, they came up with this solution: the lightest paddler in the group became a passenger on the stern of a double, Charlie paddled her boat and his was towed back to shore where the ubiquitous duct tape effected temporary repairs to allow completion of the trip. Clearly a ‘Bugger!’ of a year though other contenders for the award included a very strong male paddler removing his entire cockpit coaming when pulling off his sprayskirt and a kayak that was holed when the paddler went over a stingray. 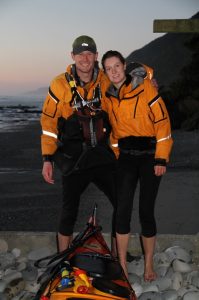 Sim and Tara were undertaking a winter South Island circum-navigation. Leaving the Heaphy River mouth, Tara managed a clean run out through huge breakers that went out for a kilometre or more. But out the back, Sim was nowhere to be seen. After waiting offshore for quite a while, Tara decided to brave the surf again and see if Sim was still on shore. Paddling frantically and being slammed a few times, Tara arrived back on the beach. But there was no sign of Sim. Tara left a note in the Heaphy hut and made it back out again – huge waves, ‘My helmet hitting the back of the boat, but the sea gods were smiling on me’. Tara proceeded to paddle about 35 kms north to near the Anaweka River, north of Kahurangi Point.

Sim was well and truly stuffed with his numerous attempts to breakout but finally drifted to shore, under a bluff where he luckily found a scrap of beach. From there, he watched Tara make her run-in, and later cranking out through four to five lines of massive breakers. His hatch cover had imploded. Sim had to tow a sluggish boat to shore. He had only been one breaker behind Tara at the start.

Their gear was split between them. Tara had the tent, Sim the fly and bivvy bag. Tara had to spend a second night on her own but managed to get to a farmhouse to phone a Te Anau contact. Sim had spent a first night sleeping under a flax bush but managed to break out on the second day. He and Tara finally met up again five days later, after Sim had used the same Te Anau contact. See KASK magazine No. 159, p.4 for a full account of Sim and Tara’s West Coast five days’ separation.

Aidan Frew
Aidan had just completed a successful kayak fishing trip and, with gear stowed, headed to the beach. The surf was still 0.5 -1.0 metres, but the tide was higher and the beach a bit steeper than when he had launched, with waves dumping a bit. After rolling out, his kayak washed back down the beach. A large wave came in, sweeping the kayak towards him and, while trying to run up the beach in soft sand, it caught him in the shin with a loud CRACK. His broken leg was set but then needed to be reset when the said leg was found to want to walk in a different direction. Graphic photos and more of the story in KASK magazine No,188, pp 5-6. The paddle and fishing rod splints are quite unique in the history of orthopedic surgery. 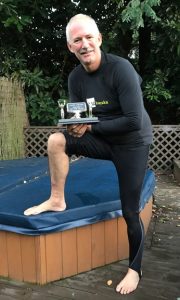 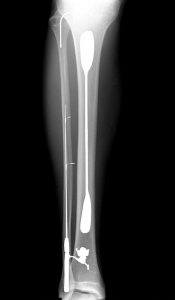 In shallow surf, for a paddler exiting the cockpit, or a support crew, always stand on the seaward side of a kayak.

David Cook
Paddling in gusting conditions near Plimmerton, David capsized and proceeded to self-rescue. A combination of problems followed, including his paddle float coming off the paddle, bungee cords failing, cramp, successive rolling (and capsizing) attempts, outgoing tide and fairly cold water. David did have a VHF radio and PLB and he explains many of the things he did right! (Can You Re-enter your Kayak after Capsizing in Short Sharp Chop and Strong Wind?). David also reflected on things he could have done better, including calling for help – people onshore saw he was having trouble and notified Police. David was rescued and received medical attention and while the latter was over the top, he felt it was better to be safe than sorry. John Kirk-Anderson provided very helpful feedback on David’s story. See magazine No.190, p.14 for David’s full account of the rescue.

Reinforces the case to do training in realistic but safe conditions. Training is the best time to make mistakes, test gear and technique.

John Gumbley
John was kayaking with a group down the Clarence River. A member of the group capsized and got cold, so they all went ashore and lit a fire to warm-up and rest. It was a hot day. John unzipped his drysuit while having the break. There was then a bit of a rush to get on their merry way again but soon after John capsized in a rapid and proceeded to get ashore, only to discover he had gone from being rather skinny to that of a Michelin man look-alike. He had forgotten to zip up his fly! It was left to one of his colleagues to lift the legs of the erstwhile beached figure to drain out half of the Clarence River. At a subsequent KASK gathering, many (secretly) advised John that he was not the only hapless dry suit wearer to suffer the same embarrassment. See the full story in KASK magazine No.197, pp 7-9.

Bill Watt
Bill was paddling on Rakiura (Stewart Island) and the day being sunny and warm, he decided to have a swim. Stripped off, gear in kayak, he went for a brief swim. Returning, he discovered a large sea lion was approaching to say, ‘Hullo’. Bill was faced with the prospect of the sea lion being positioned between him and his kayak, with said craft potentially drifting off with the incoming tide – and then having to explain to the local Constabulary on how he came to be spotted naked on a beach. Fortunately, the sea lion and Bill came to an understanding. Through complex maneuvering, the sea lion finally carried on up the beach and Bill returned to his kayak, and with kit back on, paddled off, with the sea lion accompanying him for a bit. Other paddlers have had the somewhat alarming experience of stumbling upon large sea lions on Rakiura, but sans clothing, Bill took it to another level.

Seals can be cute, inquisitive, and friendly but keeping a safe distance with (any) wildlife imperative.