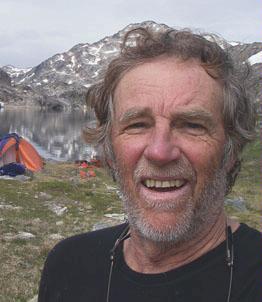 When not sea kayaking, Paul Caffyn lives on the edge of the Tasman Sea on New Zealand’s West Coast. He worked as a coal exploration and mining geologist, a job which took him deep underground in the local coal mines until he retired in 2002.

Although Paul began canoeing at the tender age of 9 on the Brisbane River, he only took up serious sea kayaking in 1977. In the following 33 years he has notched up over 40,000 miles in his single West Greenland style kayaks. His Australian trip is regarded as one of the greatest small boat voyages, compared with those of Shackleton, Franz Romer and Slocum.

1978: Paul’s first major sea kayak expedition was around Fiordland with co-paddler Max Reynolds. They left Te Waewae Bay on 21 December 1977 and reached Jackson Bay 27 days later. Paul carried on solo to complete the first kayak circumnavigation of the South Island. This trip was the subject of Paul’s first book Obscured by Waves.

1979 summer: Paul kayaked 1,700 miles around the North Island, another first, and completed the trip with a Cook Strait crossing. This trip was the subject of a second book Cresting the Restless Waves.

1979 winter: Paul teamed up with Max Reynolds again to cross Foveaux Strait and together they complete a gripping first kayak circumnavigation of Stewart Island. Dark Side of the Wave completed Paul’s New Zealand trilogy of his kayak travels around New Zealand. Max unfortunately drowned in a flash flood in January 1980 and Paul dedicated the Stewart Island book to the memory of Max.

1981: On 28 December, Paul set out from Queenscliff near Melbourne and spent the next 360 days achieving the first kayak circumnavigation of Australia. This 9,420 mile paddle is acknowledged as one of the most remarkable journeys ever undertaken by kayak. Paul had to contend with a tropical cyclone which nearly swept him off a small offshore islet in the Coral Sea, raging surf, tiger sharks which frequently bumped into the kayak in the Gulf of Carpentaria, crocodiles, sea snakes and three sections of sheer limestone cliffs. To overcome the three 100 mile plus long sections of cliffs, Paul used Nodoz tablets to stay awake and lomotil to keep his bowels dormant during these overnight paddles. The longest stint along the awesome Zuytdorp Cliffs in Western Australia, took 34 hours of continuous paddling. 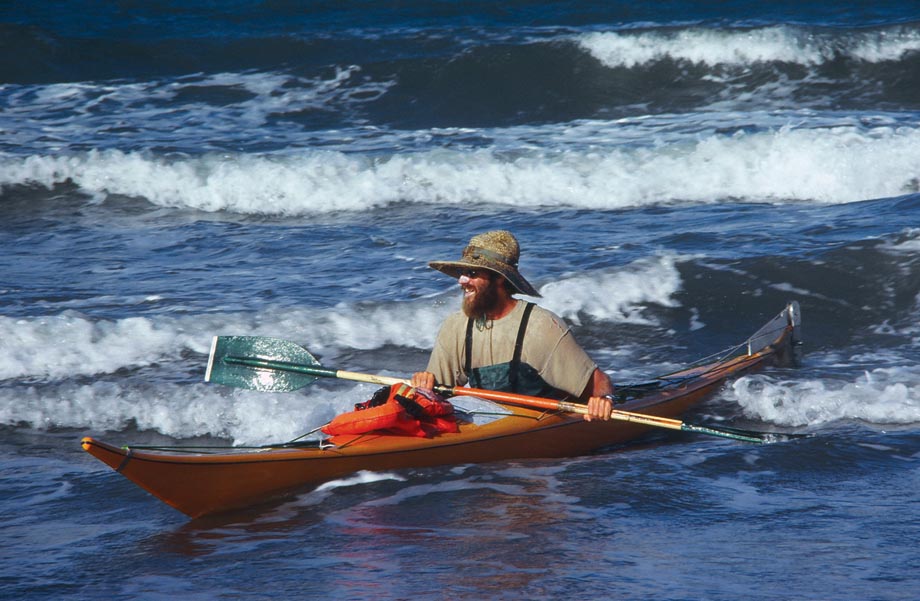 1985: Paul completed a 4,400 mile 112 day paddle around the four main islands of Japan. This was another first and led to widespread publicity of kayaking in Japan, including a ‘nude’ centrefold in a Japanese edition of Playboy.

With co-paddlers, Paul has twice attempted to kayak across the Tasman Sea from Tasmania to New Zealand.  During a 1987 attempt with Ron Allnatt, a combination of severe weather and the Tasmanian authorities curtailed the attempt. During a second secret attempt in 1989, Paul’s co-paddler chickened out when eight miles off the coast of Tasmania. Paul was not willing to paddle the double kayak solo.

1989 – 1991: In August 1991, Paul paddled into Inuvik, in the North-West Territories of Canada, to complete the first solo kayak trip along the entire coastline of Alaska. Commencing from Prince Rupert in British Columbia in April 1989, this 4,700 mile trip took three northern summers to complete. Paul filmed the 1991 trip from Nome to Inuvik, not easy when paddling solo – Canterbury Television edited the tapes with TV News footage of Paul training on the West Coast, into a 30 minute documentary.

1991: Paul’s staunch paddling supporter, friend and mentor, Graham Egarr, died of melanoma on 17 September 1991. After Paul returned from his Alaskan trip, Paul visited Graham only days before his death, and together they set up the framework for the Kiwi Association of Sea Kayakers (KASK), which was incorporated as a non-profit association in 1992. Paul spoke at Graham’s funeral and took over the role of editor of ‘The Sea Canoeist Newsletter’, a role he has continued with to the present day. (It is now a 24 page colour bi-monthly magazine).

1994: In April, after 10 years of trying to interest a publisher in a book about the Australian trip, Paul cashed in a life insurance policy and self-published his story as The Dreamtime Voyage – Around Australia Kayak Odyssey. The initial print run of 2,000 softcovers, plus a limited run of 300 hardcover, sold inside 18 months, and Paul reprinted another 1,000 soft cover. These sold out by 1998.

1994: In June, with a new co-paddler Conrad Edwards, Paul attempted the first stage of a planned first kayak transit of the NW Passage, continuing eastwards from Inuvik, but loss of confidence – mentally and physically – following the gut surgery, led to Paul flying back to NZ after only two weeks padding in the calm waters of Prince Williams Sound.

1998:  Greenland – a 690 mile kayak trip along south-west coast, from Kangerslussuaq to Narsarssuaq with Conrad Edwards.

1998: Paul edited and produced a 2nd edition of the KASK handbook.

1999:   Greenland  – 700 mile paddle along the west coast from Kangamiut north to Upernarvik, with Conrad Edwards.

2003: Paul edited and produced a 3rd edition of the KASK Handbook

2005: Paul self published a second edition of Obscured by Waves South Island Kayak Odyssey, with a totally new A4 edition; new maps, layout, photos reworked. Both softcover and a limited edition of signed and numbered hardcovers.

2006: Paul edited and produced a 4th edition of the KASK handbook, a 200 page A4 size, spiral bound manual, which is accepted as the best practice for sea kayaking in NZ.

2007: Paul paddled the East Greenland coast from Isortoq to Lake Fiord, with Conrad Edwards, to the fjord where Gino Watkins drowned on 20 Aug 1932, and also to the 1930-31 BAARE expedition base. This was a reconnoitre for the big trip in 2008 and to see if Paul had the balls (physical and mental) for the big trip down the SE coast of E Greenland.

Happy as Larry at passing Puisortoq

2008: A 691 mile paddle from Isortoq down the SE coast of Grønland, to Prins Christian Sund, then westwards to Narsaq, with Conrad Edwards. This trip followed the 7th journey of the 1930-31 British Air Route Expedition, which expedition leader Gino Watkins made in a small boat with August Courtauld and Percy Lemon. This was the first time, since the time of the Inuit paddlers, that this icy journey was completed by Westerners in single kayaks.

2009: April, a fly in by helicopter to Fiordland, with a party of three paddlers, re-visiting the historical sites via kayak in Dusky Sound.

2010: August – a 25th anniversary edition of The Dreamtime Voyage self-published, with both a soft-cover and limited edition casebound editions printed. 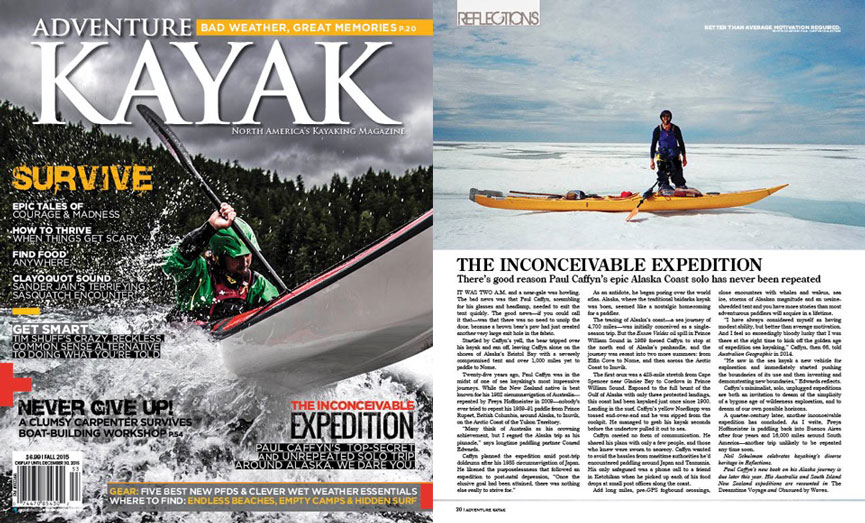 2019: Showing  at the Left Bank Gallery, Greymouth, 60+ years of Adventuring exhibition. An exhibition of Paul’s collection of kayaking, climbing and caving photographs along with paintings and art works he has collected over the years plus two of his expedition kayaks.