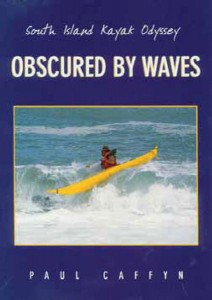 In late December 1977, Paul Caffyn and Max Reynolds set out from Te Waewae Bay to paddle sea kayaks around Fiordland. The south-west corner of New Zealand has a reputation for unpredictable weather, big seas and lots of sandflies. Surviving capsizes in surf at night, some huge swell days, not to mention the sandflies, they arrived at Jackson Bay 27 days later, both adamant they never wanted to sit in kayaks, ever again.

With Max unable to join him, Paul returned to Jackson Bay and set off solo to continue paddling around the South Island. With a shore-based support crew following, including the ship dog Ben, Paul complete the first 1,550 mile kayak South Island circumnavigation back at Te Waewae Bay in late April 1978.

Paul’s account of the South Island trip was published in 1979 by McIndoe, but the 2,500 print run of ‘Obscured by Waves’ sold out by 1984 and was virtually impossible to track down in second hand bookshops. Continuing enquiries for the book led Paul to publish a second edition in a completely new format. The preface includes an update of many of the characters who featured in the first edition, including local tour bus operator Matthew Lysaght who was one of the support crew for the Fiordland trip. His nickname at the time was Maestro. Paul has used a large A4 format for the new edition, added more photos and redrawn the maps with help from Lyn Rothery.

The first half of ‘Obscured by Waves’ describes the Fiordland trip, the magnificent fiords, the crayfishermen at work and play, the lighthouse keepers and the humorous antics of the paddlers’ support crew. The second half of the book describes Paul’s solo trip, highlighted by encounters with huge surf landings on West Coast beaches, sharks, killer whales and strong tide races. The story is a blend of narrative, early maritime history, insights into the life of lighthouse keepers and friendly coastal dwellers who took Paul into their homes and hearts, and some absolutely terrible puns.