Paul used his yellow Nordkapp kayak (Isolde) for a solo paddle around the coastline of Alaska during the northern summers of 1990 and 1991.

See the bottom of this page for the full story in three PDFs.

After two failed attempts to paddle a double kayak across the Tasman Sea from Tasmania to Fiordland, Paul decided he needed a big trip to get morale back up. He was also extremely intrigued as to how Arctic skin kayaks evolved.

Paul decided to paddle solo around the entire coast of Alaska from Prince Rupert in British Columbia to finish at Inuvik on the Mackenzie River. With bugger all access for a support crew, Paul tackled this adventure solo, landing at remote Inuit villages to retrieve pre-organized food parcels that he had had earlier mailed from the lower 48. Paul always included a note to the local postmaster, saying he was a Kiwi paddling around Alaska!

Paul planned this solo 7,500 km paddle over one northern summer but that catastrophic oil spill from the Exxon Valdez (10.8 million gallons) abruptly ended his 1989 mission. Paul pulled the pin on the trip and put down his paddle at Elfin Cove. The local fishermen said that he would end up looking like a ‘slime ball’ if he continued his trip in ’89.

In May 1990, Paul paddled out from Juneau into the Gulf of Alaska, and reached Nome in early August, a distance of 4,409 kms. This trip was one of Paul’s most enjoyable and challenging; being dumped by big surf in the Gulf of Alaska, having his tent ripped open by a huge brown bear whilst he slept, but dealing with the ‘diabolical deltas’ that left him with nightmares.

Paul left his kayak in Nome for the winter, then followed the ice pack north in 1991, spending the last three days of this magic trip, paddling up the Mackenzie River to eventually land at the Inuvik road end, finally back in Canada. Highlights were being charged by a bull musk ox, having two large and very curious male brown bears wade out to his kayak. That Alaskan trip took a total of 179 days, covering a staggering 7,570 kms.

Look what has turned up for breakfast! 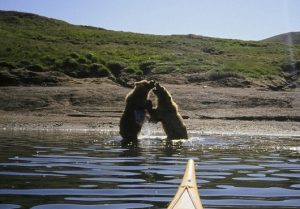 A small world thing. When Paul gave a talk about the trip to the Canterbury Sea kayak Network, there were two people in the room who had been to Inuvik. The other person had driven there.