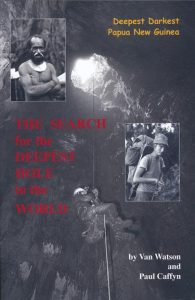 Back in 1968, an auspicious meeting was held in a Takaka Hill woolshed between Van Watson, an impetuous young Waitomo caver, and ex-British caver Julia James, ‘a lady tornado’, who was lecturing in chemistry at the University of Sydney.

Van and Jules discovered a mutual interest in a quest to find the deepest hole (cave) in the world. Australia had nothing really deep in the 60s, so their quest focussed on the marble massifs of Mt Arthur and Mt Owen, in the South Island of NZ, with a series of recces and annual Xmas expeditions.

The very early 70s were a time of transitioning from laborious ladder and rope belay descents, to a radical new technique involving abseiling (descending) on a single rope then prusiking (ascending) on that same single rope. Much faster.

Following rumours in 1970, of very thick limestone beds in the Lavani Valley region of PNG, with the potential for a world depth record cave, Jules convinced Van to get a job in PNG. During field-breaks, he was tasked to look for an area with more caves than he could shake a stick at, an area with a ‘catch cry’ to bring together a bunch of 26 cavers, searching for the ‘Deepest Hole in the World’.

It worked – but most of the poor buggers had no idea of what they were in for; tramping over a 9,000 foot high pass, tropical jungle, blood-sucking leeches, and a muddy track that could swallow you and your pack.

Some never went caving ever again. Some went on to achieve marvellous stuff. This book is Van’s narrative of how the trip was conceived 47 years ago, plus a selection of tales from those still on their perches, how they viewed the 1973 expedition and what they went on to achieve.

Paul Caffyn has tied it all together with his ‘better than average’ photographs and snuck in a few chapters of his own.

And now a new New Zealand caving book that can be read in bed without muscle strain on the arms. But be warned, this book contains humour of the dry, wet and very damp kind.

This book is very different – it is a Boy’s and Girl’s Own adventure book, charting Van’s early caving and work experience then his meeting with Julia James in a Takaka woolshed. This led to a series of annual Xmas expeditions to Mt Owen and Mt Arthur with the quest to find a really deep hole and ultimately to the 1973 Muller Range Expedition. It was the first introduction for most of the cavers to the PNG highlands native culture, likewise for the locals who thought cavers were going down deep muddy holes looking for treasure!